So, last weekend, I challenged myself to start following my cupcake dream and make two different batches of cupcakes and icing, completely from scratch. There had been a bit of prep in the two days previous, as not being any sort of baker in the past, I lacked most of the required equipment and ingredients! I spent 4 hours weighing out exact quantities of ingredients on my new scales, mixing with my borrowed electric whisk for at least the required time and, throwing in the odd prayer that they would rise once they went in the oven!

The vanilla sponges came out brown and risen so I decided to give the carrot cake a go. Sure enough, following the mantra to use quality ingredients, exact measurements and never open the oven door until they are ready to come out, the carrot cake cupcakes turned out as firm, moist sponges with well-distributed raisins!

Purely for investigative reasons, Other Half and I sampled (a few) of the sponges for taste and texture (plus it was way past lunchtime and we were starving!) and made mental notes accordingly.

Exhilarated by my ability to bake mini sponges, I made the vanilla icing in a batch of pink and white and proceeded to try to ice with a palette knife. Despite step by step instructions and pictures in the book, my results were definitely a mixed bag BUT, as Other Half kept reminding me, it was my first time! 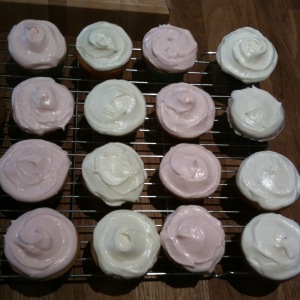 There was a missing orange for the cream cheese frosting so I packed away ’til we had been shopping on Sunday. A good hours work the next day and the orange cream cheese frosting looked beautiful sitting atop the carrot cakes – it also tasted so nice that there was definite extra icing consumed during this time!

I quickly picked up some handy tips during my first bake-off:

In an effort to share the cupcake love and calories, I took the majority to work for elevenses and they were very well received. I got full support from everyone for my idea of trying out a couple of new flavours every weekend..!

As this first bake-off was a success, it edges me a teeny step closer to living the cupcake dream…

Ever had a random thought pop into your head that just seems to stick for no sensible reason?

I was watching a TV show about a bakery that had a Business Guru at their disposal, ready to turn round its dwindling profits but, the owner refused all advice. As the programme finished, it suddenly hit me what a great idea it would be to run my own cupcake business. Completely random – I don’t bake and I’ve never run a business BUT I love eating cake and have always been a creative type of bod: is this enough?!?

I couldn’t shake the idea so started looking at decorating courses and other cupcake specialists to see what is already out there. Inside, a voice whispered that I’m thinking of the impossible: you need a credible Dragon’s Den appearance for the start-up money needed, as well as weighing up all the many risks attached. But then, I came across a lady who started her own business from home with only £1,000 – I’d never even thought of doing it that way and so it seemed a fraction more possible.

I found some courses that offer basic baking skills and decorating, as well as tips for starting your own business. I started watching YouTube clips of amateurs and professionals doing their cupcake thang. I told Other Half and he has only laughed at me a couple of times (because this has sprung from nowhere and believe me, I know how crazy it sounds!) yet, he has already started looking at other peoples websites, sending me links to ones that are different or cool in some way and, bought me a cupcake making book.

Is this going anywhere? Who knows?

Should you ever follow such a crazy whim? Maybe!

Should you tell people about an idea that may fizzle out at any second? Probably not, yet for some reason, I seem to be telling the world…

Watch out! Invisible temp about…

It appears that working as a temp also offers me the privilege of an undercover identity which, would be most exciting if that didn’t actually apply at work! I was incensed twice within 10 minutes today, the conversation went as follows (all names have been changed to prevent potential perpetrator embarrassment!)

The scene: I’m sitting quietly working at my desk when the IT Lady walks in and asks someone for Sabrina the Temp. She is pointed out on the opposite side of the room, so IT Lady walks over.

I look up and realise IT Lady actually wants Sabrina, a different temp, who is sitting opposite her, talking to someone.

Me (light-hearted, friendly tone): “IT Lady, if you need Sabrina, that’s her there.” (I point)
IT Lady (looking around the office with slightly mad eyes and a definite accusatory tone): “Well I don’t know who any of you are!”

How rude, I thought to myself.

Not 5 minutes later, I went to find the lady who gives out car park keys as there is a space for me on Monday.

Me: “Hi Key Lady, the receptionist sent me to see you to get a car park key for Monday.”
Key Lady pulls a face: “Why, oh why me? How long for?”
Me: “Just for Monday, there is only one spare space next week.”
Key Lady: “Mumble grumble, well that’s a lot of messing about for one day, I wish she hadn’t sent you to me.”
Me (wondering how complicated the key process is): “Should I go to someone else?”
Key Lady: “No, I’ll do it.”

Key Lady stands up and walks 4 steps to her cupboard, unlocks it, takes out bag of keys and hands me a piece of paper.

Key Lady: “Write your name and the date on there, you have to sign it out then back in again.”
Me: “Ok.”
Key Lady: “Are you a temp?”
Me: “Yes.”
Key Lady: “Can you write temp next to your name, it’s just that I don’t bother to get to know anyone who isn’t permanent!”
Me (through gritted teeth): “Thanks! I will bring it back on Tuesday.”

Having lived with Other Half in his bedroom at his parents house for a year and then, after finally finding our own flat, 6 months down the line we are on the move again! Our landlord decided to invoke the 4 month clause in our 12 month contract and tell us he was selling up. Not ideal, we thought but, it might take a while to sell so no moving hurry – 1 week later it was sold to the little old lady who got the first viewing! Oh well we mused, 2 months is plenty of time to find a place to live that has parking for 2 cars…

With 16 days left before we were living on the streets, we finally found a newly renovated house in a small village (very countryside!), with car parking for 2. It was a close thing; all 3 couples who first viewed it put in rental offers but, we snatched victory with our eagerness and availability to start paying rent the very next weekend.

So now we face the joy of packing up all our belongings once again, and making ourselves at home, in someone elses house…